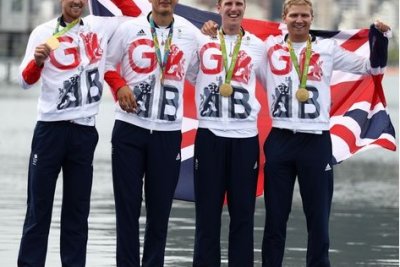 Rowing fans at Molesey Boat Club roared with delight as two of its members won gold in a tense Olympic final.

Mo Sbihi, who lives in Thames Ditton, and George Nash from Guildford were victorious in the men's coxless four on Friday (August 12).

Together with fellow crew members Alex Gregory and Constantine Louloudis the four powered past the Australians in second and Italians in third.

It is the fifth time in a row the Great Britain men's coxless four has won gold at the Olympics.

Adam Heayberd, 34, from East Molesey , is a committee member at the Barge Walk boat club.

He said: "Controlled would be a good way to describe the win.

"We all know Mo and the GB crew are strong boys, although it was quite tense, especially when the Australian crew came back, but by the 500m mark we had a good margin.

"Mo's a very active captain here, the committee all try to make sure he hasn't got too much of a workload as we want him to get on with his rowing career.

"He's Molesey through and through, he always supports the rowers here, juniors to masters level, he's a great captain."

Huge cheers erupted in the Molesey clubhouse when the four crossed the finish line.

Among the fans was 75-year-old Molesey resident Tony Nockles.

He said: "There was a wonderful atmosphere at the club, at the start everyone was a bit nervous, you could tell.

"At halfway I wasn't sure they were going to make it but at three quarters it was clear, they just had to keep going. A wonderful result, and that half the crew are Molesey members makes it even better."