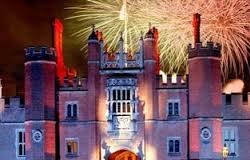 2015 will mark 500 years since Cardinal Wolsey – Henry VIII’s trusted adviser - commissioned builders to lay the foundations of Hampton Court Palace.  Today, it is one of Britain’s best-loved treasures, famously Henry VIII’s pleasure palace, the centre of court life for over 200 years.  In celebration of this momentous anniversary, throughout 2015, the palace will host a series of special events, displays and entertainments, exploring the vast sweep of half a century of history: from the tumultuous reign of Henry VIII, to the small army of curators, conservators and gardeners who keep the palace ticking over today.

Records show that Cardinal Wolsey first paid builders to work on what would become Hampton Court Palace in 1515.  The King’s most trusted servant, his star in the ascendancy, commissioned a palace in which he could entertain a monarch.  Just over a decade later, he had surrendered the palace to Henry VIII in the midst of the ‘Great Matter’ of his divorce from Katherine of Aragon.

Since the royal occupancy of Hampton Court began, the palace has been a witness to the honeymoons of Henry VIII, Mary I and Charles II, and the birth and baptism of Henry VIII’s much longed for heir.  It has been the setting for confrontations and private meetings between Mary I and Elizabeth I; Elizabeth and her many suitors; Charles I and Cromwell.  It is the place where Jane Seymour died, where Charles I was imprisoned, and where William III suffered a fatal accident.  Shakespeare performed in the Great Hall; Handel played in the Chapel Royal, and Jerome K Jerome’s Three Men in a Boat got lost in the famous maze.

In the spirit of this dramatic history, in 2015, Hampton Court Palace will bring all 500 years of history to life, with a series of celebrations to mark the survival of this remarkable building.